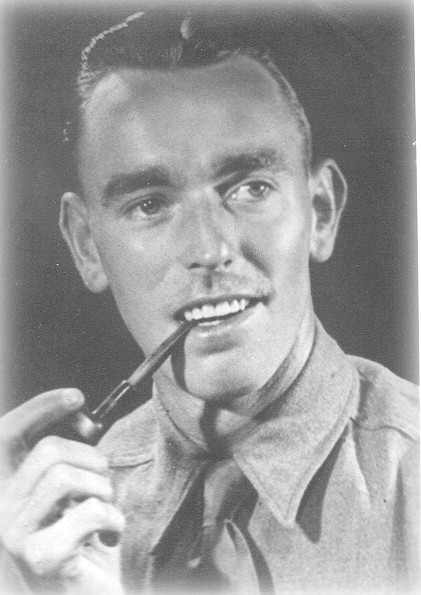 Originally a welder he joined the Territorial Army in early 1939. He saw service in Africa, India, Middle East and Germany. He married Doris Downing on a 48 (or was it 72?) leave. They honeymooned in Clent.

After the war they bought their first new (Mucklows) home at 14 Pine Road, Tividale. He worked at Henry Hope and Sons in Smethwick moving into their accounts department (blue to white collar). Later he joined Eaton Yale and Towne (lockmakers) in Willenhall. The family moved there in 1960 to a McLean House at 22 Perry Hall Drive, Short Heath. He did not like living that far north and moved back to 1 Ashdown Drive, Wordsley near Stourbridge in 1964.

They lived there until his retirement (c 1980) when they built their bungalow Bryn Del in Penrhigaled Lane, Cross Inn near New Quay. They lived there happily celebrating their 60th wedding anniversary on a trip to Orlando, Florida. He maintained his fitness until diagnosed with lung cancer in 2002. His ashes were scattered at his own request from Lovers Bridge in Aberaeron to be swept into the Irish Sea.

He was a keen West Bromwich Supporter, brewer and winemaker. He leaves one son.